Many months had they spent in the quiet of  Norscan Hinterland. The land was not expansive, but was fed by a good stream from the local river and was remote from marauding bands. There was little talk or news of the local Jarl or anyone of authority in the area, so the old homestead had been slowly repaired over the last 18 months without disturbance.

After many years of travel the "Widow" was happy in her new environment, despite the brambles and the nettles that first faced them as they tried to clear the land, and the invasive slugs that seemed to gloat  and feast on anything planted in the ground - but yes - she was happy ....

Initial problems with debts and gold in store had been mainly resolved - the loyal wenches of the Crimson Moon had been offered a re-location or a substantial monitory advance to set them up in a new life - and all obligations to Lord Wolf were paid in full. Rumour abounded that Pip (the Boss Lady)  had found herself a sinecure with the Magister of the War Host itself .. Good for her. It was something that we would never have been able to achieve...

But in the hinterlands of Ffynnon Wen a quiet oasis in Norscan backlands - where the Crimson Wolves were once rumoured to have held sway, the "Widow" planted her crops and harvested her goods, and Vollsanger helped out where he could.

Her wish was to make the ground grow and provide her bounty ..
His wish was to see the piles of wood that surrounded the homestead could bind together and build an edifice fit for the Gods - a Temple to Norsca - a Tavern fit to bear the name "CRIMSON MOON".

For so many years the tavern had moved from place to place - from war zone to war zone, providing that small element of safety and joy to the heroes who each day would put their lives upon the line, not knowing if they would return to pay their bar tab..  and now, in the quiet of Norsca, the shell was taking form ...  Indeed today, it seemed that it was taking a pulse of life as he wondered around the walls made of wood rather than canvass, almost as if it was whispering to him ..

"Have you seen the Moonstone?" Agnes asked..
"No!. I haven't seen it since I came here. You must have brought it with you when you left the War Host"
"It is on the hearth in the kitchen .. I though it best to keep it where it could be seen but where no-one would think to find something so valuable."
"The mottled stone ? I thought it was a paper weight or something"
"No - that is the the Moonstone that is the heart of the Crimson Moon. As long as it survives, the Crimson Moon will always exist. Whatever happens to any of us. Agna found it may years ago before we had any ideas other than a kitchen to feed the Storm Wolves. Sometimes I miss Agna. Crazy man - quiet through almost any conflict - but out in battle he became a berserker healer - would fight through anyone to save a life...  then lost his own life going back to fetch some water for the fighters.. such a waste ....  But the Stone is acting strangely  - look "

He looked. And she was right. The Stone was glowing. Sort of Pulsing with no rhythm.

"I wonder if it is because I finished the last walls on the Tavern and she is waterproof tonight ?"
It was a Tavern and this was the Tavern Stone - it seemed that there may be a connection ..

"Be careful" said the Widow...
"I am always careful" replied the Bard.. which elicited a snort from Agnes  - he had never been known to add caution to his list of attributes...

With a nod to Thor and a salutation to Frigga - after all she was the one that Agna was aligned to, and presumably may have had some dealings with the finding of the Moonstone, he gingerly lifted the stone. It was not heavy. Indeed it was only really a hand full, striped but strangely warm in the cool evening air.

He took it to the newly assembled Tavern and looked around.
"Probably should be in the middle of the building" he mused..  so he put it onto a high shelf at the center of the structure...  He waited .. Nothing happened ..

"Oh well. Probably another Norscan Fable!" he thought and shut the door as he left ...

But the Moonstone knew.

It was a Quarter to Eleven - so the Tavern could be anywhere ..

It was always a Quarter to Eleven in the Crimson Moon ......

Vollsanger called in next morning to see that all was well.  The door opened to the Tavern and it seemed somehow more vibrant than it had before. No longer a building site where panels were being screwed to the walls - but almost as though there were people already in the building.

Any Place - One Time

But the doorway to the bar was shimmering - Vollsanger grabbed a guitar and headed through the shimmering curtain - always one time ..but where was he now??
Faint hearted never would know - He was Der Vollsanger - He would find out ..
He would be "Here All Week"  - or die ! 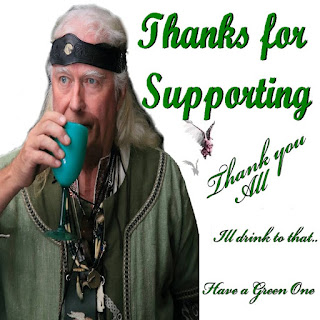